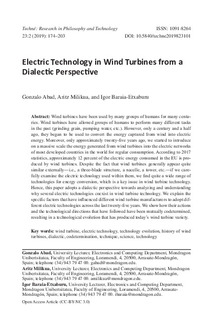 Electric Technology in Wind Turbines from a Dialectic Perspective